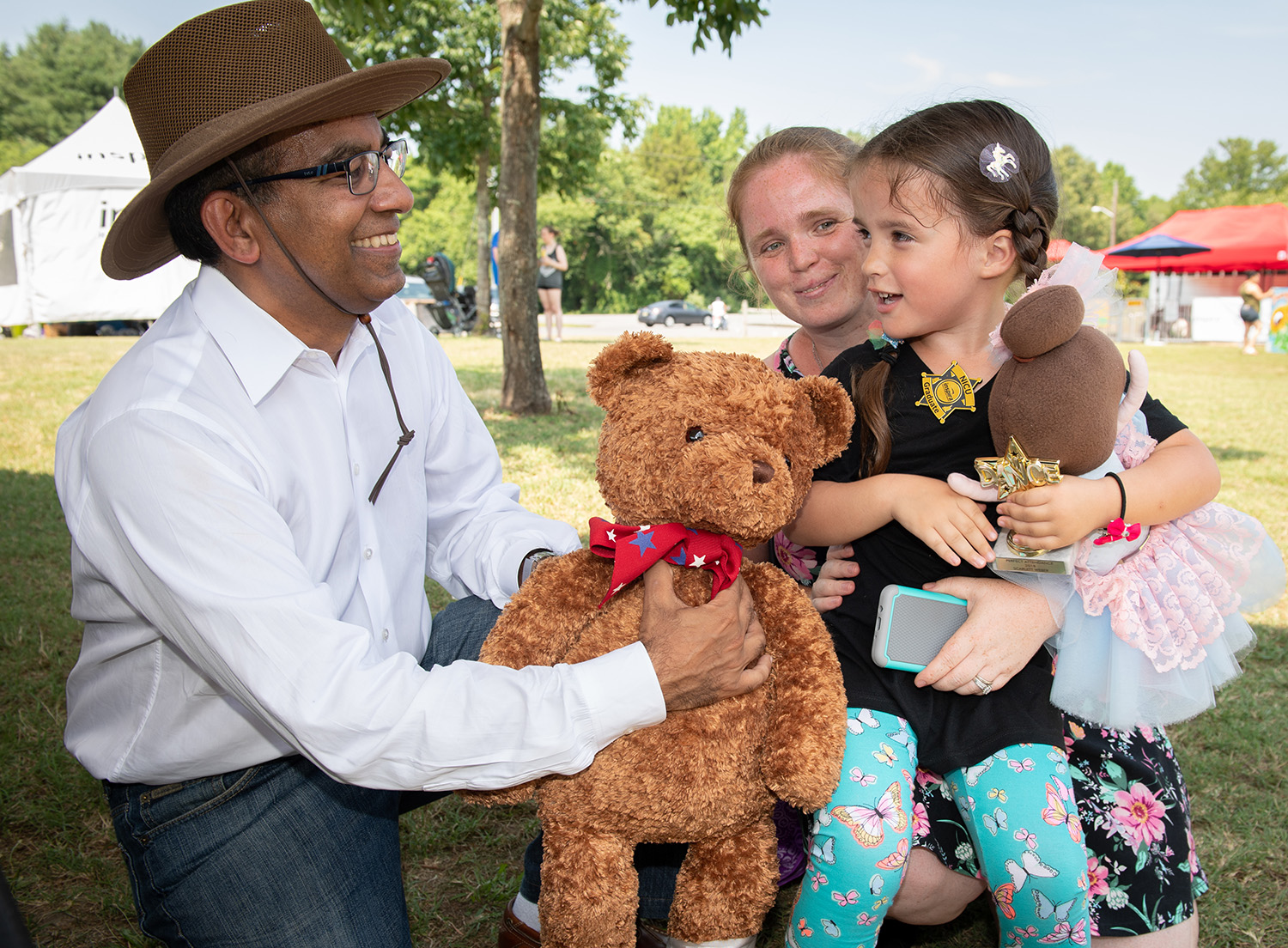 Saturday, June 30, 2018- Muhammad U. Anwar, M.D., chief of Neonatology, reunites with NICU graduate Scarlett Weber (5, of Vineland) and her mother Cindy during the fifth anniversary celebration of Inspira’s NICU.

VINELAND, NJ (July 2, 2018) – More than 200 cowboys, cowgirls and their families rounded up at South Vineland Park on Saturday for a good ol’ fashioned hoedown celebrating the fifth anniversary of the Deborah F. Sager Neonatal Intensive Care Unit at Inspira Medical Center Vineland. NICU graduates from the past five years were reunited with the physicians and nurses who cared for them during their earliest and most fragile stage of life.

The brave little cowboys and cowgirls had a knee-slappin’ good time as they reconnected with the NICU staff while enjoying pony rides, a petting zoo, face painting, a balloon artist, a photo booth and a barbecue. Frozen drinks, snow cones and a misting station kept everyone cool in the hot temperatures.

“Events like this are especially enjoyable for our staff to see the true impact of the work they do on a daily basis,” said Janet Davies, VP of Patient Care. “Having a baby in the NICU can be the most stressful time of a parent’s life. Our team often forms special bonds with these families, but they don’t always get to see what happens after these precious babies are released from our care.”

“All of the doctors and nurses at the Vineland NICU are amazing, and they made us feel right at home. Still to this day, four and half years later, we keep in touch with the doctors and nurses, they mean a lot to us,” said Cara Garrison of Cedarville, whose 4 ½ year old daughter Julianne spent 73 days in the Deborah F. Sager Neonatal Intensive Care Unit. “They [the NICU team] like to see how everyone is doing down the road, not just in the incubators.”

For more information about Inspira Health Network, please visit www.InspiraHealthNetwork.org or call 1-800-INSPIRA. To stay connected with Inspira announcements and work being done in the community, please join the conversation on Facebook and Twitter.

Together with its medical staff of more than 1,100 physicians and other care providers, as well as more than 5,700 employees, Inspira Health Network provides evidence-based care to help each patient achieve the best possible outcome. Accredited by DNV Healthcare, the network’s clinical and support staffs are focused on providing quality care in a safe environment. For more information about Inspira Health Network, visit www.InspiraHealthNetwork.org or call 1-800-INSPIRA.

View All News
Making an Impact, Leaving a Legacy

After decades of care, leadership, and support for Inspira Health, longtime Vineland residents Gary & Betty Galloway have committed to supporting the Foundation through a planned gift.

With its recent donation of $50,000 to the Inspira Health Foundation, the Bill Bottino Cancer Foundation has now given more than $550,000 in support of Inspira Health’s Cancer Services.

Partnering with Patients to Express Gratitude

Inspira Health Foundation recognizes the impact that gratitude can have on a patient’s healing process, and how it can make you, our doctors, feel recognized, appreciated and more enthusiastic about your work.