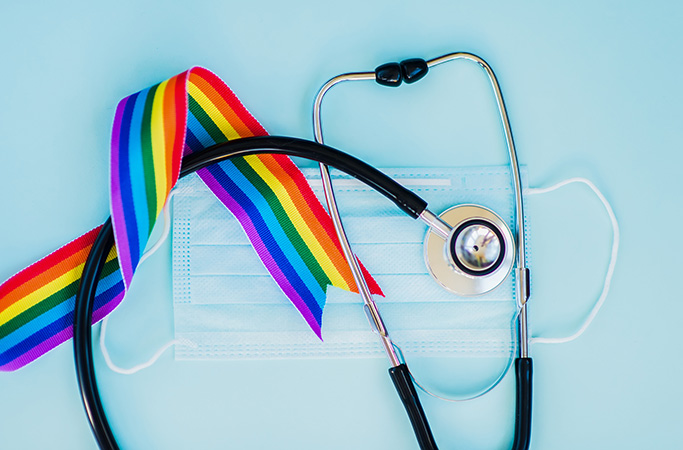 LGBTQ+ Americans endure the highest level of health care disparities—preventable gaps that get in the way of marginalized groups achieving optimal health. Fifteen percent of LGBTQ+ individuals delay care for fear of being discriminated against, according to the Center for American Progress. Here’s an overview of today’s disparities in LGBTQ+ health care.

What is the history of LGBTQ+ health care?

As a marginalized population, LGBTQ+ subject matter has been excluded from clinical research and trials, preventing health care providers from learning how to properly care for LGBTQ+ patients.

LGBTQ+ health care disparities are best understood through the lens of a longstanding bias against LGBTQ+ individuals. “Because of limited research, LGBTQ+ individuals are restricted to a niche provider network, which can leave patients with inferior care compared to heteronormative patients,” said Dr. Ukwu. This cycle directly impacts preventive and routine LGBTQ+ behavioral and physical health.

The LGBTQ+ community is facing a mental health crisis: LGBTQ+ youth are 2.5 times more likely to commit suicide and LGBTQ+ teens are 6 times as likely to experience symptoms of depression than non-LGBTQ+ youth, according to Mental Health America.

“This community is plagued by mental illness and suicidality, not just because of a general stigma surrounding mental health, but also because most providers lack the knowledge or ability to understand LGBTQ+ health needs,” said Dr. Ukwu. In a survey of LGBTQ+ individuals conducted by the Kaiser Family Foundation, over 50 percent of respondents reported having a provider deny care, use inappropriate language or blame their sexual orientation or gender identity as the cause for mental illness.

LGBTQ+ health disparities exist outside of the mental exhaustion that accompanies finding proper care. Where LGBTQ+ physical health is concerned, there are additional obstacles when compared to straight, cisgender patients, especially when it comes to preventive care and health screenings.

“One oversight within preventive health care is care and screenings for transgender men. Not all gender affirmation surgeries are the same, so many transgender men still have ovaries, just like women,” said Dr. Ukwu. “For women, we have specific screening guidelines for gynecological health, but this is not the case for transgender men, who may still be at risk for conditions like polycystic ovary syndrome (PCOS).” According to the National LGBT Cancer Network, as many as 25 percent of transgender men have PCOS. But many of these individuals suffer from a lack of proper care and treatment because of their gender identity and sexual orientation.

How can I find an LGBTQ-friendly health care provider?

Lesbian, gay, transgender and queer health is a nuanced competency. When talking with your health care provider, it’s important to be as transparent as possible about your gender identity and sexual orientation, even if it feels scary. The best way to begin fighting these health disparities is to start addressing them head-on.

Inspira Health is committed to giving all patients equal access to the best care in the South Jersey region. “We are here to serve you. We are here to give you the resources you need and the support you deserve. There is a lot to learn still, but the only way forward is together,” said Dr. Ukwu.