Professionalism, Confidence and 'the Little Things' Made All the Difference for a Police Officer with COVID-19

Professionalism, Confidence and 'the Little Things' Made All the Difference for a Police Officer with COVID-19 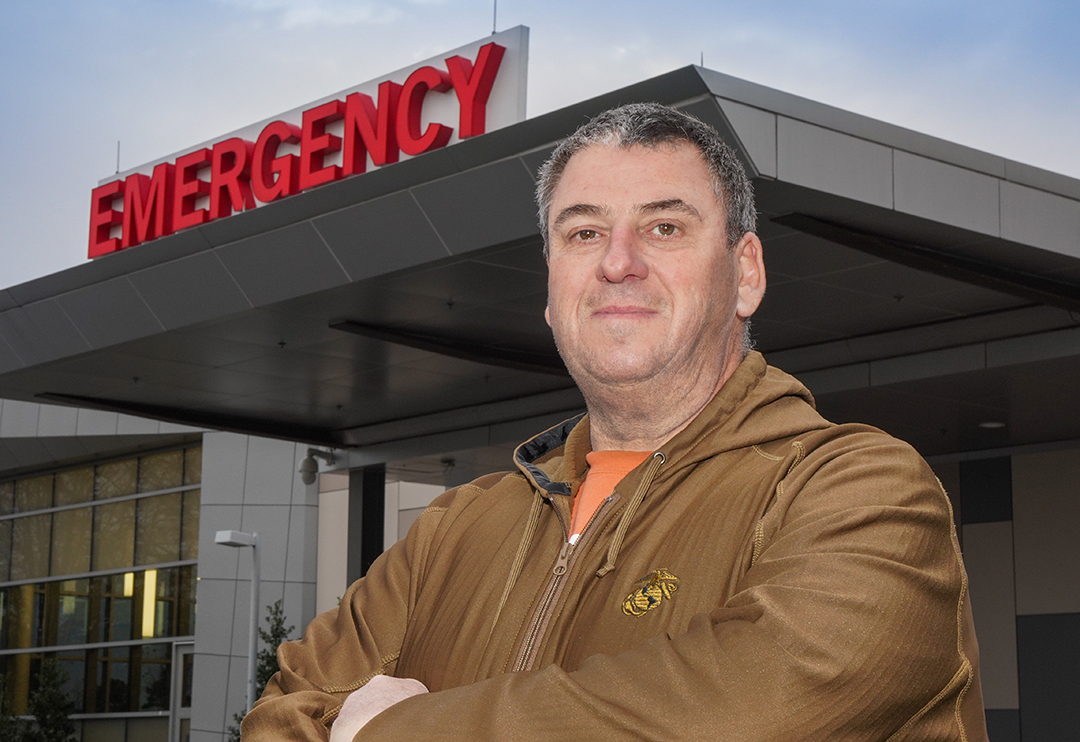 Peter Maroon had been a resident of Vineland for less than six months and had never visited an Inspira facility when he took ill in early November. The illness hit him hard.

"In a day’s time, it laid me out. I went to a hospital in central jersey first because I was working in that area," Peter recalled.

Peter was given IV fluids and told that he probably had COVID-19. He went home to Vineland, hoping he could ride it out without going back to a hospital. But he didn't get better, and some days he felt worse. The fatigue, dizziness, body pain and cough made it difficult to do anything. He had to hold onto the walls just to walk the short distance to the bathroom. Standing long enough to take a shower was out of the question.

It was his fifth day home when he Googled "urgent care" -- Inspira Urgent Care appeared on his screen. He attempted to call the nearby Vineland location, but instead was connected to the Emergency Department of Inspira Medical Center Vineland. Although he is not sure how he reached the ER, Peter was fortunate he did. In fact, he felt certain that he would need to be admitted to the hospital. He was right.

Like countless others during the pandemic, Peter arrived at the ER nervous and scared. He felt worse than at any time in his 51 years and was well aware the coronavirus sometimes caused severe illness, even death. It probably didn't help that he was in a hospital he knew nothing about. Fortunately for Peter, he quickly realized he was in good hands.

"I had two of the best nurses you could ever dream of,” Peter said, referring to his primary nurse in the ER, Casandra Voulgarakis, and Megan Hallquist, the nurse who cared for him when he was admitted for what would be a five-day inpatient stay.

"She [Casandra] knew I was nervous and scared; she did everything to reassure me. That meant the world. And she was very good at her job."

Casandra's frequent check ins, and responsiveness to questions and requests impressed Peter. He could see it was a busy day in the ER, but she made the time to make sure he had what he needed. Her confidence also helped Peter feel more at ease.

"She walked in the room with a mask and face shield; she had a confidence about her," said Peter. 'Here’s what we are going to do.' She wasn't scared, she knew her job, she was not apprehensive. I think she sensed how nervous I was. She gave me that sense, we've got this, don't worry about."

When Peter got to his room that evening, his first interaction with a nurse was almost a replay of what he had experienced in the ER. Meg was confident, attentive and professional. Her efforts kept Peter at ease while she explained his care plan, including the procedure for receiving convalescent plasma and Remdesivir.

"I was put completely at ease. She did her job with such professionalism," Peter said. "They [Meg and all the members of the care team] didn't make me feel like a patient. They made me feel like family, or a friend. 'If you need anything, call,'” they told him.

As was the case with Casandra, Meg checked on Peter frequently. Even a quick 'How are you doing?' from the doorway provided a level of comfort that was priceless.

Peter was discharged on day five, the day he received his fifth and final dose of Remdesivir. He was still weak, but glad to be going home.

As Peter continues his recovery at home, coughs still interrupt his conversations. His strength and stamina are coming back slowly as he adds more physical activity to his daily routine. Together with his wife, Pete is getting back to walking his dogs. The walks are still brief, but he is making progress. His plans call for returning to his job as a police officer in central New Jersey, before making good on his already announced retirement in 2021.

Pete was so pleased with the care he was receiving at Inspira Vineland, he sent an email from his hospital bed describing the excellent care provided by Cassandra and Meg. Although he was still battling COVID-19, he wanted to make sure that they were recognized for the care they provided.

"Can you PLEASE reach out to them and give them both a pat on the back and let them know their work in not going unrecognized," Peter wrote in his note to Chris Roller, nurse manager of the Medical Acute Care unit at Inspira Vineland. "If ever you need someone to tell the public about your great nurses, call me."

“My heartfelt thanks go out to Casandra and Meg, and everyone who helped create the Wow experience for Peter. I’m also grateful to Peter for his willingness to share his story.”

Coughing is one of the most common symptoms of COVID-19, and for some people, a lingering cough can persist for months after infection. Here’s what you need to know about an ongoing COVID cough.

With a medical staff that has a strong interest in research and depth of experience, Inspira was fortunate to have a hand in phases two and three of the VERU-111 clinical trial, led by principal investigators Samaresh Dasgupta, D.O., an emergency medicine physician at Inspira Medical Center Vineland, and M. Scott Dawson, M.D., a cardiologist at Inspira Medical Center Mullica Hill.

It’s important for providers to screen COVID patients and identify those who may be experiencing long hauler syndrome. A transitional care program, like Inspira’s COVID-19 Recovery Program, can help long haulers find relief from their symptoms and improve their quality of life.