Sometimes bringing babies into the world goes as planned. Other times, well… 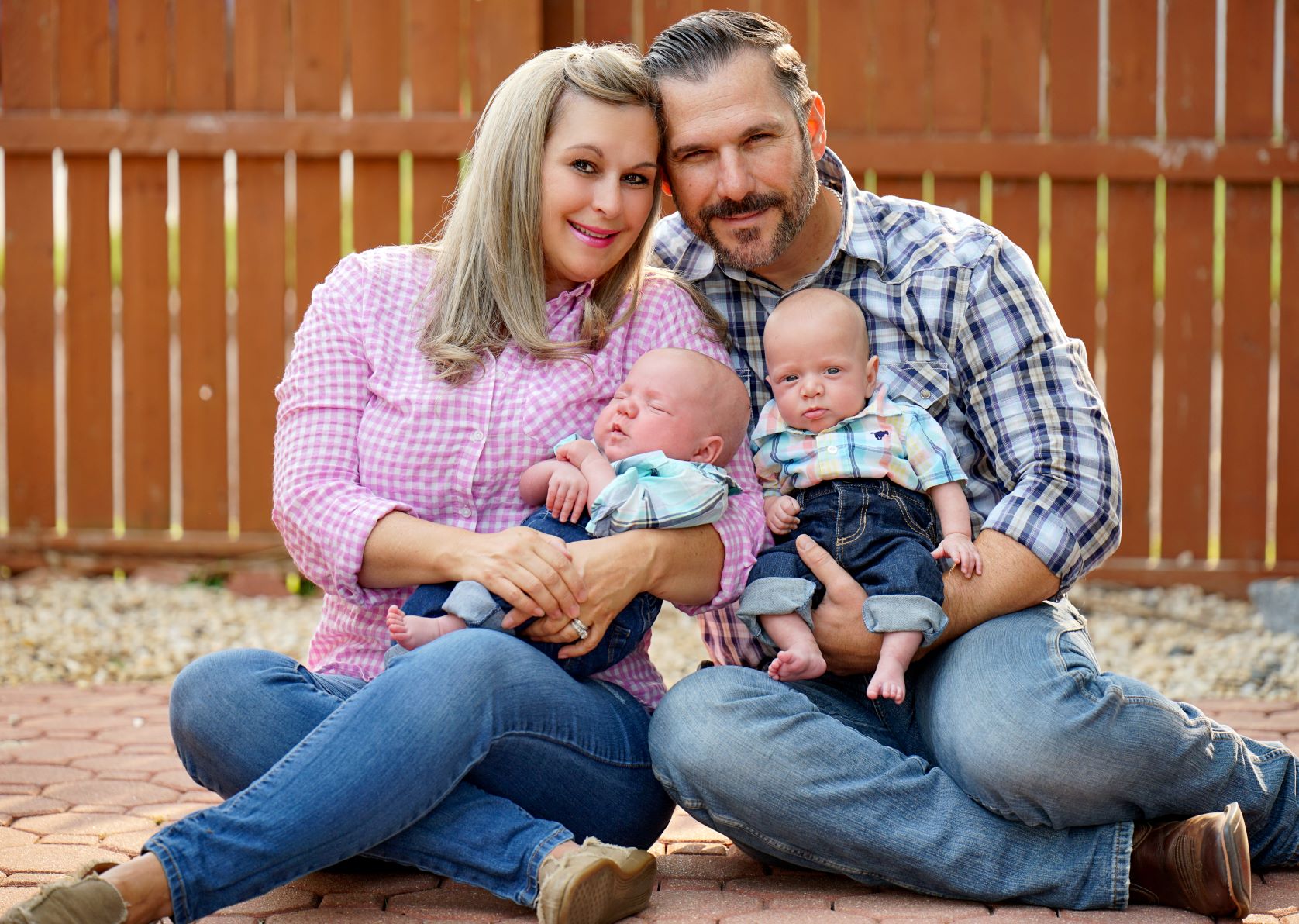 For Renee Suriani of Swedesboro, a series of unexpected twists and turns led to a complete “rewriting” of her plans. Fortunately, she had the support of her husband and a team of nurses and doctors with whom she formed deep bonds.

Suriani was busy working remotely from home when she began to feel pressure in her abdomen. At only 29 weeks and with no contractions, she didn’t immediately think her twins were on the way. Yet things progressed rapidly. Her first baby boy was crowning by the time she realized she was about to give birth. She managed to call her husband and 9-1-1 just in time. She had planned to deliver at a Camden County hospital, but the EMTs knew there wouldn’t be time to get there.  Less than an hour later, with almost no active labor, she delivered 2 lb. 9 oz. River at Inspira Medical Center Mullica Hill.

Suriani’s second baby was not quite in such a hurry. He had turned breech and seemed intent on staying right where he was. As her doctor worked tirelessly to turn her baby, Suriani recalls seeing her husband, Steven, being comforted by nurses as he watched from the doorway of her room. Suriani was also surrounded by nurses “who were doing everything they could” to help her through the labor process. About 90 minutes later, Hunter was born, weighing in at 3 lbs. 8 oz.

Suriani is grateful for the skill and determination of Dr. Anna Hanson, the obstetrician who delivered her twins. Although they had just met–with virtually no time for even a brief introduction–Dr. Hanson’s encouraging attitude and determination made a lasting impression on the first-time mom.

"She not only delivered my two babies, she saved our lives by making sure we were all okay," said Suriani. "The patience she had, how hard she worked to deliver Hunter; [she’s] an angel from above."

Suriani’s plans took another unexpected twist when both of her babies were transferred to the Deborah F. Sager Neonatal Intensive Care Unit at Inspira Medical Center Vineland. As her boys received highly specialized care in the NICU, she spent three days recovering in the Maternity Department at Inspira Mullica Hill. She had held River briefly, a few hours after he was born, but Hunter required immediate medical attention, so she wasn’t able to see him before he was transported.

Being separated was heartbreaking. Even as dad would Facetime from the NICU and provide regular updates on the boys, Suriani kept thinking, “I need to see my babies.”

"By Sunday [two days after giving birth] I was feeling a little bit better. By Monday night they said, ‘You can go home,’" Suriani recalled. "But I was scared. I was still supposed to be pregnant, and still very weak."

Her nurses provided encouragement, telling her she could do it. They helped Suriani get out of bed and take a shower. As she prepared to leave the hospital, Suriani and her nurses became emotional. The strong bonds that formed in just a few short days led to tearful good-byes.

After a few days of rest at home, she found the strength she needed. It was Friday, one week since giving birth, when her husband drove her to Inspira Vineland to see their boys. The NICU would become her second home for the next six weeks.

She bonded quickly with her babies, and the NICU nurses and doctors who were caring for them. Suriani was particularly grateful for the assistance she received with breastfeeding and pumping. She understood the benefits that breast milk could bring to her pre-term babies. The NICU team continued to support her each day, easing her transition from maternity patient to mother of two babies who required advanced care.

Suriani recalled how the doctors would point out that the boys seemed to do better after every feeding. This lifted her spirits and reinforced what she intuitively knew, breastfeeding was benefitting her boys.

The nurses called Suriani a “superhero" for her strength during a difficult birthing experience, and the perseverance she displayed while caring for her two pre-term babies while navigating the added challenges brought on by the pandemic. During the countless hours she spent at the NICU, her nurses made sure she had the education and guidance she would need to nurture River and Hunter at home.

Suriani didn’t quite feel like a superhero but acknowledges that caring for her boys is her number one priority.

"You are constantly learning every day,” said Suriani. It's the best job in the world.”

As the young family has settled in at home, Renee and Steven’s days are filled with the everyday joys and challenges of raising their “miracles,” River and Hunter. The twins are thriving, weighing in at 13 and 17 pounds respectively at their six-month checkup.

At the same time, she remembers fondly the close bonds she formed with her care teams at Inspira Mullica Hill and Inspira Vineland.

“We had a special bond. They even called their colleagues to check on me after their shifts,” said Suriani of the maternity nurses at Inspira Mullica Hill. “They follow me on Facebook now to watch the boys grow up.”

“We form strong bonds when we take time to listen. This enables us to anticipate and meet our patients’ needs beyond the strictly medical.”

View All News
Pregnancy in the Pandemic

More than $300,000 from Inspira Foundation’s Deborah F. Sager Memorial Fund used for new beds, pumps and other equipment in the NICU to improve comfort, safety and healing

Read More
Pandemic pregnancy: How to cope with a "new normal" in a time of uncertainty

If you can count backwards, you know that babies born in the new year of 2021 were conceived during the COVID-19 pandemic. The pandemic and the economy have caused a predictable decline in birth rates. However, some couples remain optimistic about the future, and some have as much, if not more time to, well, "be together," so let's just say babies are still being born.