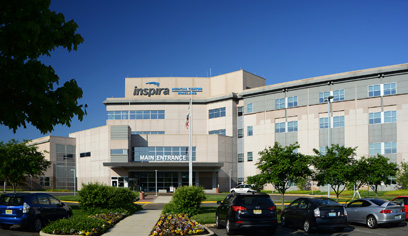 CUMBERLAND COUNTY, NJ (August 7, 2014) — Inspira Health Network is celebrating the ten year anniversary of the opening of Inspira Medical Center Vineland on August 8, 2014, marking a decade that has seen incredible growth in services and technologies.

“The opening of Inspira Medical Center Vineland in 2004 set a foundation that has allowed us to bring new services, specialists and advanced technologies to the community that previously would not have been possible,” said John DiAngelo, president and CEO of Inspira Health Network. “Our Vineland-based medical center is an accredited, award-winning facility that offers community members high quality care and services close to home.”

The 262-bed, 441,000-square-foot facility, which employs approximately 1,700 people, was built to consolidate the health system's former Bridgeton, Vineland and Millville hospitals and to provide one, state-of-the-art medical center for the region.

In 2004, Inspira Medical Center Vineland opened its doors with an expanded emergency department, a state-of-the-art cardiac catheterization laboratory and units dedicated to women’s and children’s services. For those having outpatient surgery, the new medical center provided one convenient location for blood work, imaging studies and an anesthesiologist meeting.

Since its opening on August 8, 2004, Inspira Medical Center Vineland has noted several milestones, including:

The staff at Inspira Medical Center Vineland has received several awards and recognitions, some of which include Magnet® Designation for nursing excellence, ISO 9001:2008 certification through DNV Healthcare for achieving quality objectives based on international standards, and several Beacon Awards for excellence in critical care.

Together with its medical staff of more than 1,100 physicians and other care providers, as well as more than 5,000 employees, Inspira Health Network provides evidence-based care to help each patient achieve the best possible outcome. Clinical and support staffs are focused on providing quality care in a safe environment. For more information about Inspira Health Network, call 1-800-INSPIRA.

Digital news platform Money, in partnership with The Leapfrog Group, has named Inspira Medical Centers Elmer and Vineland, part of Inspira Health, each as a 2022 Best Hospital for Maternity Care.

Inspira Health works diligently to provide high-quality care and a seamless patient experience for South Jersey. Today, we recognize and congratulate several of our doctors across our hospitals and specialties who have been named a 2022 Top Doctor by SJ Magazine.