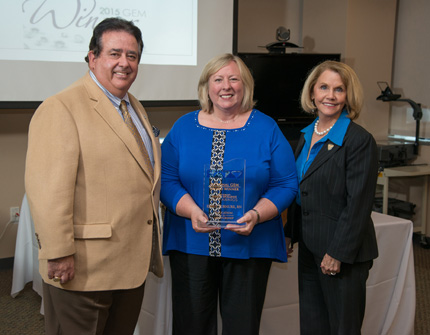 MULLICA HILL, NJ (September 30, 2015) – Emily Turnure, M.S.N., R.N., administrative director of Education and Accreditation at Inspira Health Network, has been selected by Nurse.com as one of six national winners to receive a 2015 Nursing Excellence GEM Award. Turnure, who was named in the category of Education and Mentorship, was recently presented with the award at a reception held at Inspira Medical Center Vineland.

Each year, Nurse.com conducts a nationwide search for the best of the best in nursing, generating hundreds of nominations highlighting stories of excellence in leadership, management, education, volunteerism and clinical practice. In the spring of 2015, Turnure was named a regional finalist receiving the Philadelphia Tri-State Nursing Excellence GEM Award. Nurse.com then selected six national award recipients out of the 54 regional winners.

As a nurse and leader at Inspira for more than 27 years, Turnure has led the organization through various accreditation processes including becoming the first health care system in New Jersey to receive ISO 9001:2008 certification from DNV healthcare for achieving quality objectives based on international standards. At Inspira’s Elmer, Vineland and Bridgeton campuses, she has helped to increase the number of nurses with Bachelor of Science in Nursing degrees or higher by 350% over the past four years. Additionally, under her leadership the number of nationally certified nurses at Inspira has risen on average by more than 20% for the last three years.

View All News
View All News
Inspira Medical Centers Elmer, Mullica Hill, and Vineland Nationally Recognized with an ‘A’ for the Fall 2022 Leapfrog Hospital Safety Grade

Inspira Health works diligently to provide high-quality care and a seamless patient experience for South Jersey. Today, we recognize and congratulate several of our doctors across our hospitals and specialties who have been named a 2022 Top Doctor by SJ Magazine.