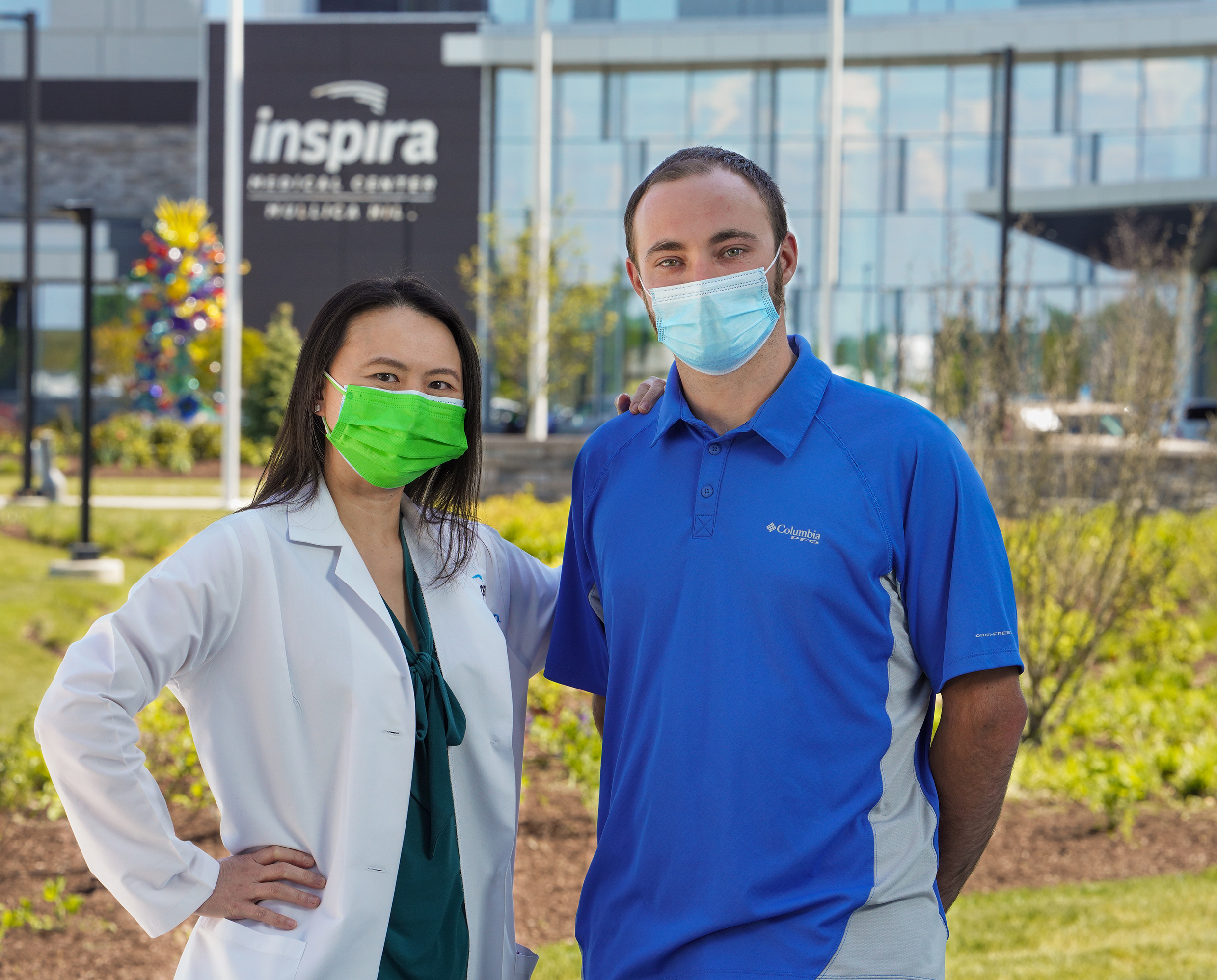 As COVID-19 began rocking the planet, Jonathan Loteck’s world was being shaken by news unrelated to the novel coronavirus. Jonathan was diagnosed with cancer, and then a second serious medical condition. The 27-year-old metal fabricator from Millville would need two surgeries and chemotherapy to eradicate the cancer. And as his treatments were wrapping up in June, a new medical concern was discovered — an abdominal hernia had formed between his rib cage and belly button.

Jonathan noticed a bulge in his abdomen and mentioned it to one of his physicians, urologist Christopher Lee, M.D. The doctor ordered scans and then referred him to a general surgeon. After consulting with the surgeon, Dr. Lee felt strongly that Jonathan should be seen by Elaine Cheng, M.D., FACS, an Inspira surgeon with advanced training in robotic-assisted procedures, including hernia repair.

It didn’t take long for Jonathan to decide Dr. Cheng was the surgeon for him. They discussed how far the hernia had advanced, and Dr. Cheng’s concerns about the impact traditional open surgery would have. It would require a large incision, which would necessitate an extended hospital stay and a long recovery process. Additionally, the pain would be harder to manager and the chance of complications would be greater.

"She had a plan," said Jonathan. "She gave me the pros and cons of the open procedure and [explained] how robotic surgery is far less invasive with very minimal scarring.”

Dr. Cheng took time to go over the robotic procedure in detail, explaining the expected outcome of the operation and how healing time would be reduced. She also shared how she would use mesh to reinforce the abdominal wall.

Jonathan was impressed by Dr. Cheng's expertise and thorough explanation of the procedure. By the end of the appointment, he was "100 percent set on her doing the surgery” because of her confidence and knowledge of the operation.

Jonathan admits that although he had full confidence in Dr. Cheng, he took some of what she said about the rapid healing process with “a grain of salt.” It would turn out that his surgeon’s words required no seasoning.

The surgery was scheduled for October to allow Jonathan’s body time to fully recover from his cancer treatment. On the 27th of the month, Dr. Cheng performed a complex five-and-half-hour robotic-assisted surgery to repair a 5” by 5” hernia. The surgery was successful, and his recuperation kept pace with Dr. Cheng’s expectations.

"[The first day went] exactly like expected…I was able to move; eating and drinking were fine. No pain (with pain medication),” Jonathan explained. “Just one night in the hospital and I went home the next day. By day three or four, I could stand on my feet for eight hours and walk around. Pain was minimal and easy to control.”

“Robotic-assisted procedures and other minimally invasive techniques have revolutionized the practice of surgery,” said Dr. Cheng. “Jonathan’s hernia repair illustrates the key benefits of this type of surgery – faster recovery, less pain and minimal scarring, even for the most complex of procedures. Often, it is in the most complex cases where we see the biggest benefits of robotic and other minimally invasive techniques.”

Jonathan went back to work about two weeks after his procedure. He stayed on light duty for about a month, then back to full-time hours just six weeks after surgery.

By early December, Jonathan had "no pain and full motion," and no restrictions. The speed and completeness of his recovery exceeded his expectations, allowing him to resume all work and leisure activities. A small scar served as the only reminder that he had surgery just a few months earlier.

Lung cancer is the leading cause of cancer related deaths worldwide and is often discovered later than is optimal for effective treatment. Inspira is focused on giving patients earlier diagnoses, at a time when their disease is more treatable. With the introduction of a new technology - the Monarch™ navigational bronchoscopy platform - Inspira does just that.