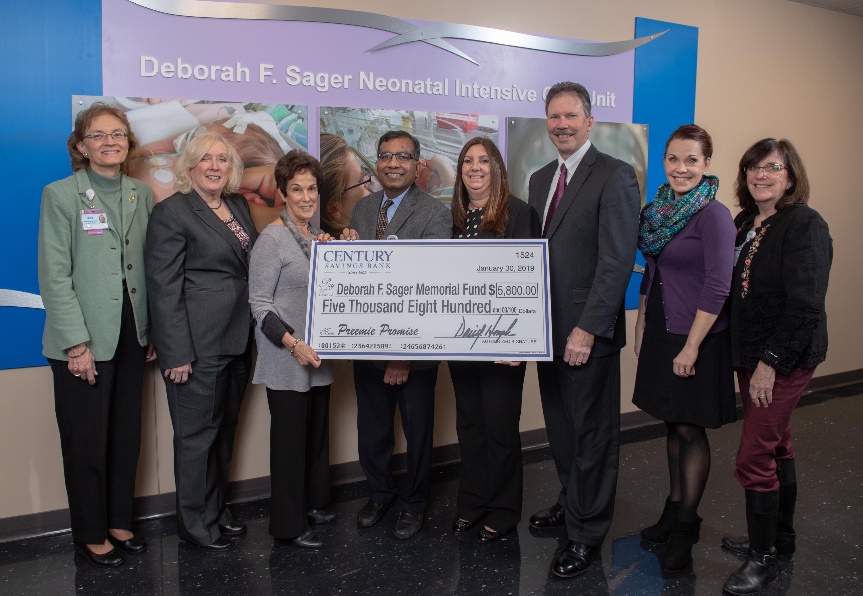 January 31, 2019 - The culmination of a three-year “Promise” by Century Savings Bank to the Deborah F. Sager Memorial Fund (DFSMF) was celebrated today with the presentation of a $5,800 check to support the care of premature and critically ill babies in the Deborah F. Sager Neonatal Intensive Care Unit. Located in Inspira Medical Center Vineland, the NICU cares for pre-term babies – as young as 28 weeks gestational age – and other critically ill newborns.

Through a partnership with Nemours Children's Health and Inspira Health, Nemours neonatologists and highly skilled Inspira nurses provide around-the-clock care for premature and critically ill newborns who require intensive, and often complex care. Babies can spend from days to three months or longer in the NICU.

“Century Savings Bank has given hope to the mothers, fathers and families of pre-term children in our area, and we are immensely grateful for their commitment,” said Penny Sager-Rossi, founder of the DFSMF. “Their enormous generosity helps support this vital partnership between Nemours and the Deborah F. Sager NICU at Inspira, which truly makes a difference right here in our community.”

“We are proud to support this campaign to help families of babies born too soon,” said David J. Hemple, president and CEO of Century Savings Bank. “It is inspiring to us to see a community so dedicated to helping premature infants receive life-saving care. The outpouring of support for the Deborah F. Sager Memorial Fund is truly heartwarming and makes a significant difference in the quality of life for so many families in our community.”

Since its opening in March 2012, the Deborah F. Sager Neonatal Intensive Care Unit has provided advanced care to nearly 2,000 premature and critically ill babies. Nemours neonatologists and trained NICU professionals are on hand – around the clock – to provide local families with care, close to home.

According to the Southern New Jersey Perinatal Cooperative, survival rates for tiny infants improve when they are born at a hospital with a Neonatal Intensive Care Unit. Of the 18,350 babies born in South Jersey (in what year), nine percent were classified as low birth weight (five pounds, eight ounces or less). Nearly two percent were considered very low birth weight (three pounds, five ounces or less).

The warm, friendly and personal support that babies and their families receive at the Deborah F. Sager Neonatal Intensive Care Unit is a source of hope and strength for those in need. Years after leaving the NICU, thankful parents still consider the medical team as part of their support network, returning to visit and keeping doctors updated on their children’s health and well-being.

Julianne Garrison was born three months premature and spent 73 days in the Deborah F. Sager NICU in 2014. Julianne is all smiles at the five-year NICU reunion held in June of 2018.

The Deborah F. Sager Memorial Fund (DFSMF) is a restricted fund of Inspira Foundation Cumberland/Salem where earnings are used only to enhance the medical care of children at Inspira. Since its beginning in 1979, the DFSMF has made a number of vital contributions to support the enhanced delivery of health care to children in our region. In 2012, the DFSMF contributed $250,000 to the Deborah F. Sager Neonatal Intensive Care Unit at Inspira Medical Center Vineland. For more information or to donate, visit dfsmf.org or contact Inspira Foundation Cumberland/Salem at 856-641-8290.

Century Savings Bank has been a leader in community banking since 1865 as a mutual savings bank with locations in Cumberland, Gloucester and Salem counties. Century Savings Bank offers South Jersey residents Community Banking Plus through the combination of traditional banking products, including checking, savings, investment accounts and personal and commercial loans, with the latest in banking technology such as online banking and bill-pay, mobile banking and cash management services. For more information, visit www.centurysb.com.

Together with its medical staff of more than 1,100 physicians and other care providers, as well as more than 5,800 employees, Inspira Health provides evidence-based care to help each patient achieve the best possible outcome. Accredited by DNV Healthcare, the system’s clinical and support staffs are focused on providing quality care in a safe environment. For more information about Inspira Health, visit www.InspiraHealthNetwork.org or call 1-800-INSPIRA.

If you’ve been using birth control, you might wonder whether it can affect your ability to get pregnant. Here are the facts.

Read More
Can You Take Cold Medicine While Pregnant? What To Do for a Cold or the Flu

Navigating pregnancy can be challenging, especially during cold and flu season. You’ve probably taken over-the-counter (OTC) decongestants to combat cold symptoms in the past, but if you’re pregnant, you’re probably wondering which remedies are safe for you and your baby. Here’s what you should consider when looking for relief from cold and flu symptoms while pregnant.