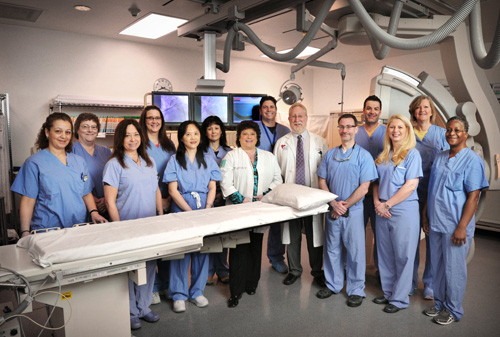 VINELAND, NJ (May 15, 2014) — Inspira Medical Center Vineland’s cardiac catheterization laboratory team was recently recognized by ADVANCE for Nurses with the 2014 Best Nursing Team award. The nursing team is one of only four hospital teams in the entire Mid-Atlantic and Lower Great Lakes region to be honored as a regional nursing team of the year.

The award recognizes the initiative, adaptability, expertise, outreach and teamwork that the nursing team demonstrated this past year as they worked to become state approved to perform life-saving emergency angioplasty (PCI) for heart attack victims in the area.

“The accomplishments our cardiac catheterization nurses have made since implementing emergency angioplasty in November 2013 is truly remarkable,” said Elizabeth Sheridan, R.N., M.A., chief operating officer of Inspira Medical Center Vineland and chief nursing executive. “Even more noteworthy, is the tremendous professional growth that has occurred. They have acquired new knowledge and skills which allow them to actively save the lives of patients who come to our ER while having a heart attack.”

Emergency angioplasty is an effective intervention to open clogged arteries and restore blood flow to the heart for patients having a STEMI (segment elevation myocardial infarction) heart attack. This more severe type of heart attack is usually recognized by the characteristic changes it produces on an EKG. The American Heart Association reports that 250,000 people in the United States suffer from STEMI heart attacks each year, which makes up nearly 30 percent of all heart attacks. Only 25 percent of hospitals in the United States offer emergency angioplasty services.

Since receiving state approval to perform the procedure, the hospital’s skilled interventional cardiologists and nursing staff have collaborated with numerous departments, including first responders and emergency department physicians and staff, to restore blood flow to patients’ hearts in times much faster than the national benchmark. With every minute saved, more heart muscle remains healthy and functioning — which ultimately means less morbidity and lower mortality rates.

About Inspira Health Network
Inspira Health Network is a charitable nonprofit health care organization formed in November 2012 by the merger of South Jersey Healthcare and Underwood-Memorial Hospital. The network, which traces its roots to 1899, now comprises three hospitals, four multi-specialty health centers and a total of more than 60 locations. These include outpatient imaging and rehabilitation centers; urgent care; numerous specialty centers, including sleep medicine, cardiac testing and wound care; home care and hospice; and more than two dozen primary and specialty physician practices in Cumberland, Gloucester and Salem counties.

Together with its medical staff of more than 1,100 physicians and other care providers, Inspira Health Network provides evidence-based care to help each patient achieve the best possible outcome. Clinical and support staffs are focused on providing safe care in a safe environment. For more information about Inspira Health Network,call 1-800-INSPIRA.

View All News
Healthy Fats: The Key to a Balanced Diet

Saturated, monounsaturated and trans fats all occur naturally in food. To the naked eye, these fats all look the same. At room temperature, however, unsaturated fats are liquid (oil, for example), whereas saturated and trans fats are solid (butter, for example). Also, in the way that these fats affect the body, they could not be more different from one another.

Read More
For this Heart Attack Survivor, 'Shoulder Pain Is His Chest Pain'

Cardiac Partners at Cooper and Inspira offers a wide range of services to help providers better care for their patients with, or at high-risk for, heart disease.