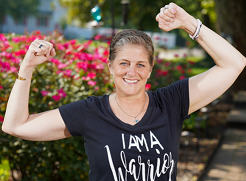 After completing eight cycles of chemotherapy, no evidence of cancer was found in Tracy Worrell's post-treatment CT scan.

When Tracy Worrell has an appointment with one of her oncologists, she doesn’t write “cancer center” or “doctor’s appointment” on the calendar hanging in her Mullica Hill home. Instead, she writes, “Mom – Cheers.” It’s a nod to the 80s hit TV show Cheers, a fictional bar where everybody knows your name.

“I don't feel like I'm at a cancer center, I'm going to a place of hope and light,” explains Worrell. "I feel like a queen. I feel special. When you have cancer, it's nice to feel special."

Hope and light were exactly what Tracy needed when she was diagnosed with an aggressive, hard to treat form of breast cancer. Even more so when she learned the cancer had already spread to her liver. Amidst the devastating news, Tracy was buoyed by family, faith, her oncology team, and the extended "family" she gained through Gilda's Club, an international charitable organization that provides robust support services to people with cancer.

Tracy's cancer journey began when she found a lump in her breast on July 30 of 2020. Over the next four weeks, she would have imaging studies, a biopsy, more imaging studies, another biopsy and meetings with several cancer specialists. Fortunately, all her specialists had offices in the Leading-Edge Cancer Center at Inspira Medical Center Mullica Hill. She would come to appreciate this more and more with each visit.

Tracy’s initial diagnosis, stage 3B triple negative breast cancer, came on August 19 of 2020. Her oncology team was hopeful that the cancer had not spread beyond her breast and arm pit. But a scan found a suspicious spot on her liver; a biopsy confirmed it was cancer. The news hit Tracy hard and she began to worry that she didn’t have much time to live. She remembers arriving at her first chemotherapy appointment in tears. But before she reached the infusion suite, she was comforted by nurse navigator Barbie DiMatteo.

“I was sobbing,” recalled Worrell. “I just bumped into Barbie while walking down the hall. She is so good at her job.”

Barbie’s words helped Tracy see her situation through a more positive lens. It was during that chance encounter that Tracy learned about Gilda’s Club, which quickly became an invaluable source of support and information. Gilda’s Club gave Tracy something that even her loving family and friends could not – a group of people who totally understood what she was going through. Inspira’s cancer program partners with Gilda’s Club to provide an additional layer of support. The organization takes its name from Gilda Radner, an original Saturday Night Live cast member who died of ovarian cancer in 1989.

Due to the aggressive nature of Tracy’s cancer, her medical oncologist, Erev Tubb, M.D., had recommended a course of “dose dense” chemotherapy, eight cycles in all. The treatment presented challenges, but Tracy persevered. With the love and encouragement of the growing support system that formed around her, Tracy stayed focused on her goal.  She told her care team – “My goal is to live.”

"I have seven kids who need me, my husband is an amazing man – I don't want to leave him," Tracy explained. "Whatever will prolong my life, I want it," she remembers telling her doctors.

That mindset, together with her experienced oncology team and unwavering faith, brought Tracy to a place that was unimaginable only a few months before. After completing eight cycles of chemotherapy, no evidence of cancer was found in her post-treatment CT scan.

After six months passed, with no sign of cancer, Tracy’s oncology team formulated a new aggressive multidisciplinary treatment plan customized just for her. It was not cookie-cutter medicine. They considered the precise nature of Tracy’s cancer, her age, overall health, family situation and her expressed desire to try anything that might extend her life. The team understood what mattered most to her. Although it had not been part of her original treatment plan, her doctors were now recommending a double mastectomy and radiation therapy. They agreed this would further reduce the chance that Tracy would experience a recurrence in the future.

The surgery and pathology provided more evidence that the chemotherapy had been highly effective. No sign of cancer was found. Tracy was in complete remission. When Dr. Tubb shared the good that no cancer was found, Tracy asked, “What do I do now?” She expected he might recommend more treatment. Dr. Tubb replied simply, “You go live your life.”

Follow-up CT scans on June 15 and September 17 confirmed that Tracy is remains in remission, with no sign of cancer.

Looking back, Tracy is grateful that she chose the cancer center at Inspira Medical Center Mullica Hill. Even her mom, who had recommended that she go to a big city cancer center, came to appreciate the value of receiving comprehensive care close to home.

Tracy is now preparing to return to the profession she loves, sign language interpreting. In addition to using American Sign Language on the job, it’s also part of her home life where she uses it to communicate with her husband and four of her children who are deaf.

More than a year has passed since Tracy found that lump, and she is grateful for her recovery and the opportunity to once again live an active life with her family and friends. She also continues to meet, virtually, with her Gilda’s Club friends with whom she has developed a deep and lasting bond.

“I feel like I'm in the best health of my life. Who knows if I am, but I feel like it,” Tracy says with optimism in her voice.

“Mom – Cheers” still occasionally appears on her calendar. And each time she steps through the gleaming glass doors for a follow-up visit, she is reminded of the hope and light the oncology team brought, and continues to bring, into her life.

In a recent study, researchers discovered a steady increase in stage 4 cervical cancer cases in the United States from 2001 to 2018, even though the disease has declined over the past 20 years. Understanding this surprising trend can help ensure you take the appropriate steps to protect yourself from this often fatal disease.

Lung cancer is the second most common cancer in the United States. Knowing its symptoms can help you and your doctor catch it in its earlier stages while it’s easier to treat.

Read More
After Decades of Caring for Others, Glassboro Woman Grateful for the Care She Found at Inspira

When Ganell Stewart, who has worked in multiple healthcare-related positions during a long career, discovered a lump in her left breast, she was scared. Complicating matters, Ganell had no health insurance, despite most recently working two jobs.